The cryptocurrency market is quite diverse. Every digital token has its own backstory, basic function, and quirks that set it apart from thousands of competing names.

But it’s not all about cutthroat competition. A few blockchain networks are providing the digital glue to bind different currencies and services together into a cohesive computing platform on a global scale. Chief among these is Polkadot ( DOT -1.18% ), the ninth-largest cryptocurrency as measured by market cap.

Is Polkadot a good investment right now? Two Fool.com contributors came up with very different answers to this simple question. Read on to see whether Polkadot is a good fit for your own investment portfolio.

Rick Munarriz: Polkadot has come a long way in a short time, and it’s easy to see why the crypto community is donning this Polkadot dress. The platform’s ability to allow different blockchains to run independently inside a single network is turning heads. If you’ve heard about the Web3 revolution — a groovy vision of the future where web services are run by open protocols instead of corporations — Polkadot is one of the movement’s biggest stars. It’s a cool story, but things start to get dicey once we swan dive into the risk pool.

Polkadot didn’t launch until the springtime of last year, and there’s uncertainty that comes with that new crypto smell. Digital currencies have come under selling pressure in recent weeks, but Polkadot is the hardest-hit denomination among the cryptocurrencies with the largest market caps. Polkadot has shed nearly half of its value in the 30 days ending on Dec. 5. The use cases for Polkadot aren’t half as valuable as they were a month ago, but instead of viewing this as a buying opportunity, it could be a red flag about the additional risks and volatility that crypto investors are taking on with Polkadot.

Things could get worse. There are exciting things taking place with Polkadot, but this doesn’t mean they will translate into higher prices for the crypto itself. There’s plenty of buzz surrounding Polkadot’s parachains, custom blockchains anchored to its relay chain. The launch of the first Polkadot parachain auction took place in early November, and we’ve already covered how the value of the crypto has been shaved nearly in half over the past month. Bulls are excited about future moves, including one that will increase its capacity by 100-fold — a necessity as it’s currently able to process just 1,000 transactions per second. We’ve seen the “sell on the news” sell-offs trip up cryptocurrencies, making Polkadot a riskier digital currency in a volatile market.

Anders Bylund: It’s no secret that cryptocurrencies can be volatile. In Polkadot’s case, the token has swung between a 52-week low of $4.55 and a high of $55. For the most part, Polkadot’s price changes have been an amplified version of the Bitcoin ( BTC 2.63% ) chart. Polkadot’s day-to-day correlation with Bitcoin’s price moves has actually been tighter throughout 2021 than the price-change relationship between the Dow Jones Industrial Average ( ^DJI 1.87% ) and the Nasdaq Composite ( ^IXIC 0.00% ) index. 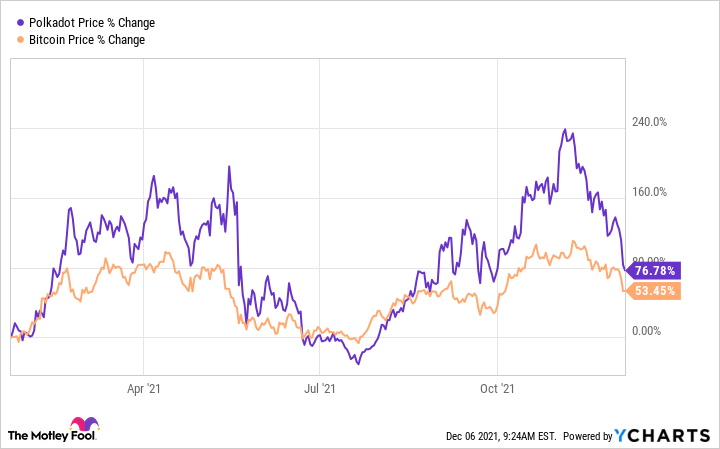 My point is, the market is generally not treating Polkadot as the unique development platform it is. Instead, the price tends to follow the tenor of the broader cryptocurrency market with little regard to what’s actually going on inside the Polkadot ecosystem. I think that’s a mistake that sets early investors up for fantastic gains in the long run, as Polkadot’s full business model evolves into its final form.

In my view, the world of cryptocurrencies and blockchain platforms holds incredible real-world utility as different tokens carve out specific niche functions that can then be combined to form a complete computing system on a global scale. For example, you’ll see one cryptocurrency network managing a decentralized banking system wherein another token handles payment transactions and a third one includes smart contracts for each transaction.

In this vision, Polkadot plays the crucial role of connecting these separate networks with each other, in a system that is easy for app developers to tap into and even simpler for end-users to consume.

Today, Polkadot’s total market value is less than 3% of one-trick pony Bitcoin’s. I don’t expect the interconnection network to eclipse Bitcoin’s market cap anytime soon, but this absurd imbalance should even out a bit over time. If Bitcoin gets back to its old high-octane growth again while Polkadot earns a larger slice of the cryptocurrency market overall, Polkadot’s early backers should pocket a market-beating total return. Next year’s plethora of parachain launches should get the party started.

This article represents the opinion of the writer, who may disagree with the “official” recommendation position of a Motley Fool premium advisory service. We’re motley! Questioning an investing thesis – even one of our own – helps us all think critically about investing and make decisions that help us become smarter, happier, and richer.