Shiba Inu (SHIB) is a meme coin that aims to be an Ethereum-based equivalent to the popular meme coin Dogecoin (DOGE). In late October, it surpassed Dogecoin in market cap and has received a lot of momentum from the crypto community. However, proof linking Shiba Inu deployment wallet to the one that launched UFO Gaming has recently come to light.

The speculation comes after Shiba Inu announced a few weeks ago they would be launching their own digital assets including a layer-two chain called Shibarium, nonfungible tokens (NFTs), and a play-to-earn (P2E) same. Reputable Twitter profile Cousin Crypto mentions: “Rumour has it $ufo has ties with $shib if this is true.” SHIB price also shot to an all-time high last month, and advocates suggest there’s plenty more to come.

Industry newcomer UFO Gaming has already earned comparisons with Axie Infinity from crypto-watchers and investors alike. As the first blockchain gaming company to host an e-sports tournament, it established itself as a serious player in the GameFi industry. UFO Gaming recently announced a sponsorship of the Chainlink Fall 2021 Hackathon, among other industry leaders including Google Cloud, EY, Filecoin and Polygon.

Luckily, every transaction on the Ethereum blockchain is logged and can be traced on Etherscan, which is exactly what Blackbeard and LilMoonLambo did. They found the following trail of transactions linking the wallet that deployed Shiba Inu on July 31, 2020, to the one that launched UFO Gaming on May 21, 2021. Four Etherscan links show a direct correspondence between Shiba Inu and UFO Gaming and imply that Shiba Inu developers might have in fact launched UFO Gaming. 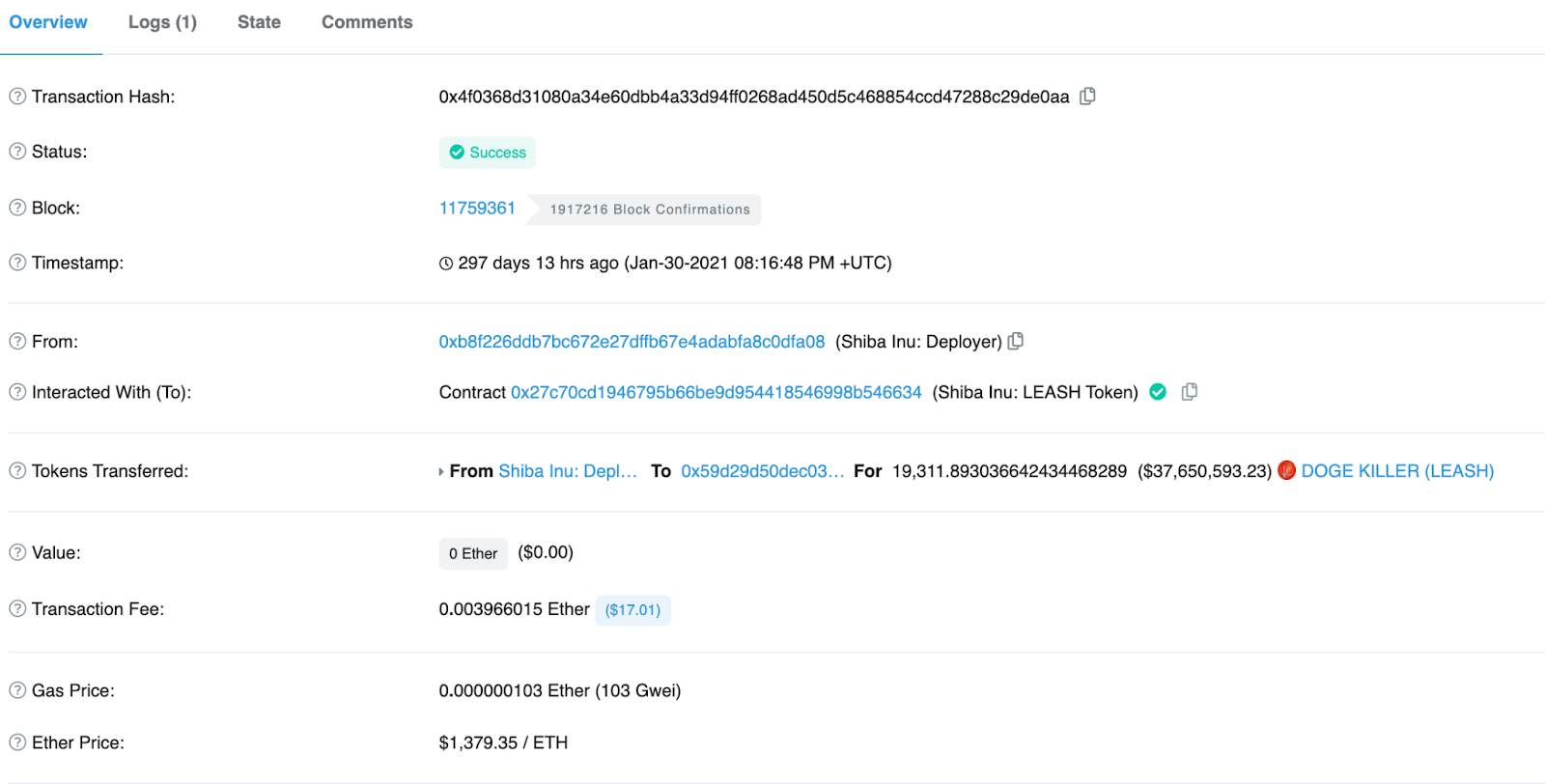 Etherscan link #3 showcases the transaction of Leash to the UFO Gaming deployer.

Comparisons between SHIB with UFO Gaming (UFO) are all over Twitter and Reddit. In this Reddit post, user Such-Tie argues that both began as community-driven projects with 100% of the supply distributed on Uniswap for anyone to buy. Further, he notes that in July, Shiba Inu announced UFO as one of their first pairings in their flagship decentralized exchange (DEX), ShibSwap. Though initially dismissed as a replication of other popular meme coins, SHIB now has a market cap that exceeds its predecessor, DOGE. Industry watchers are now witnessing a similar overhaul between Axie Infinity and UFO Gaming. If UFO Gaming catches up to its rumored predecessor Shiba Inu’s peak market cap, it can go 42x from this point.

UFO Gaming also has the flexibility of launching games through multichain, adding more credence to theories that Shibarium will be a future site of their launch game. Having already surpassed a $1 billion market cap and partnerships lined up with industry pioneers, UFO Gaming is fully set to consolidate its position at the top end of the play-to-earn marketplace.

UFO Gaming is an independent gaming company, developing blockchain games within an ever-expanding ecosystem. Players come together to create their own clans, own and trade virtual land and earn NFTs and cryptocurrency, all within the Dark Metaverse.

UFO Gaming seeks to bridge the gap between blockchain and traditional mobile and PC games, offering unprecedented player opportunities within the P2E realm. The Dark Metaverse is a closed loop ecosystem that will consist of P2E games with breedable in-game NFTs that allow users to receive revenue. By utilizing the decentralized mechanics of blockchain, UFO Gaming enables any player to earn while playing, creating a new paradigm in the gaming industry.

This is a paid press release. Cointelegraph does not endorse and is not responsible for or liable for any content, accuracy, quality, advertising, products, or other materials on this page. Readers should do their own research before taking any actions related to the company. Cointelegraph is not responsible, directly or indirectly, for any damage or loss caused or alleged to be caused by or in connection with the use of or reliance on any content, goods, or services mentioned in the press release.