Bitcoin has undergone a wild ride across 2021, opening the year with a meteoric bull run that saw the asset soar to unprecedented highs of $63,576 before harsh pullbacks caused the cryptocurrency to tumble by more than 50%. Given that BTC underwent its third halving event in May 2020, market commentators had largely been optimistic about the performance of Bitcoin, but despite touching new highs in November, BTC has consistently underperformed in the months since. Is this the beginning of a long-term bear market?

It’s important to caveat Bitcoin’s recent performance by acknowledging that a large-scale downturn in stocks worldwide owing to growing global inflation rates and Covid uncertainty impacted the Q4 cryptocurrency market, which hampered the growth of BTC.

Although there had been hope that BTC would build on the progress it made in Q1 of 2021 later in the year, December saw bigger flash crashes take place across a number of cryptocurrencies. Early January saw further pullbacks, sending the price of Bitcoin to $41,000 from $50,000 just one month before.

Despite a series of strong rallies across the past year, Bitcoin has so far failed to build on its all-time highs.

The two all-time highs that BTC/USD experienced in 2021 form a ‘double top’ pattern in terms of technical analysis – which could be a cause for concern regarding the asset’s 2022 prospects.

As finance journalist, Lawrence Carrel notes in Forbes, double tops can indicate that investors are looking to push for a final profit for a bullish trend. This occurrence can lead to bearish reversals from which traders may be looking to profit from selling the stock on a downtrend.

However, it’s also important to note that double top trends aren’t necessarily as impactful in the world of cryptocurrencies due to the far greater levels of investor sentiment that plays a role in determining an asset’s value – as opposed to the inherent value of the asset itself.

When an asset experiences a fall of more than 20%, it’s largely considered to be in a bear market. Although highly volatile fluctuations make this seem like an arbitrary number, it still makes Bitcoin’s 36.5% fall from its November all-time high particularly concerning. But what does Bitcoin’s outlook for 2022 look like?

There are very few observable patterns across a landscape as volatile as cryptocurrency, but Bitcoin’s short lifespan has proven time and again that its halving events typically herald parabolic price rallies that can accelerate the value of BTC. 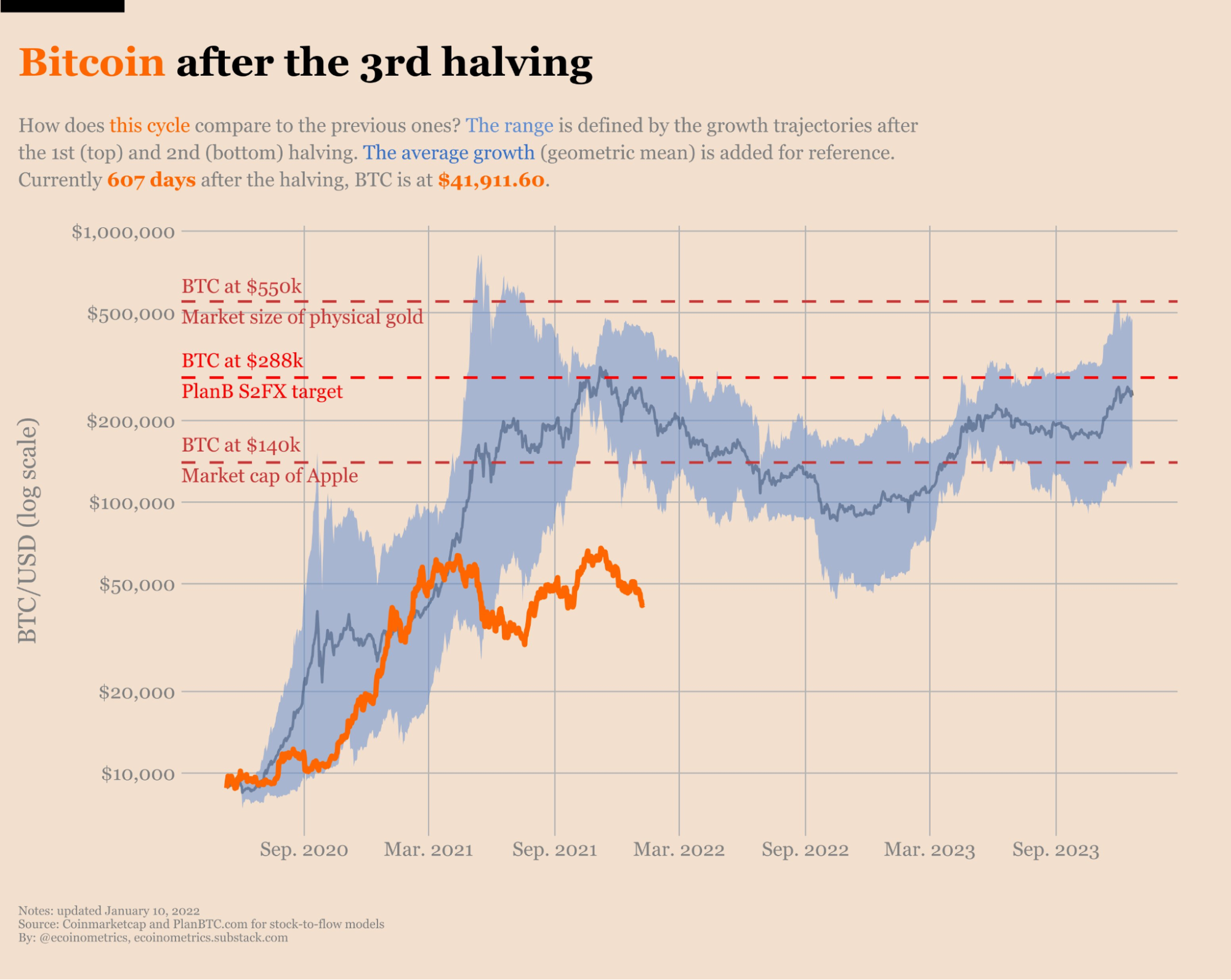 As we can see from the available data, Bitcoin’s third halving event – a pre-programmed occurrence where the volume of BTC awarded to its miners is halved approximately every four years – has so far failed to live up to the trends of the past.

Bitcoin’s below-par performance in relation to its previous halving cycles may be causing a downturn in sentiment that’s impacting investor confidence.

“Many market participants stand firm on their prediction that the price of bitcoin will eventually reach $100,000, although some are already saying that the benchmark won’t be reached until 2025 or later,” explained Maxim Manturov, head of investment research at Freedom Finance Europe.

“BTC was previously expected to trade at $100,000 by the end of 2022, but in general, it is worth understanding that such risky assets are extremely sensitive to interest rates and if rates rise this asset could become even more volatile. So, it is not unreasonable to be cautious and look at the technique.”

It’s worth noting that, despite a troubled end to Q4 2021, there’s still plenty of bullish sentiment surrounding Bitcoin, and the asset’s recent bounce from an early 2022 low of $40,655 shows that BTC still has plenty of investors eager to buy.

The most recent halving cycle for Bitcoin may have failed to deliver the bewildering highs of its past two incarnations, but it did bring unprecedented levels of institutional adoption from major financial players like PayPal and Visa, as well as the news that El Salvador had introduced the asset as legal tender.

As Ariel Santos-Alborna notes in Seeking Alpha, “There are currently more than 800 crypto-focused hedge funds and venture capital firms alone. Nearly every financial institution seeks to maximize their profit and loss at year’s end to show positive metrics and attract more investors in the new year.”

Bitcoin’s recent performance may point to a bear market, but it’s important to note that all bets are off in the world of cryptocurrencies, and BTC’s newfound institutional interest may yet provide a platform for the asset to flourish – just so long as sentiment surrounding the crypto landscape remains positive.