Ethereum Foundation, the non-profit that supports Ethereum (CRYPTO: ETH) and related technologies, says 2021 was the year that “Web3” came into public consciousness, which allowed creators to break free from centralized platforms.

What Happened: In its “2021: The Year in Ethereum” report by Josh Stark and Evan Van Ness, the foundation said in 2022, the world “began to understand the vision of a more decentralized internet built on Ethereum.”

It termed Ethereum as the “foundation for a digital civilization”.

The authors pointed out that the internet’s “creator economy” has been dominated by centralized platforms like Alphabet Inc’s (NASDAQ: GOOGL) (NASDAQ: GOOGL) YouTube or Spotify Technology S.A. (NYSE: SPOT) until now.

“Ethereum gave creators new tools to monetize their work. One tool stands out in particular: the NFT,” wrote the authors.

While the report said the non fungible token (NFT) ecosystem was still in its early stages, it pointed out that such a market barely existed a year ago.

“The rapid expansion of the NFT market drew mainstream interest. Steph Curry, Eminem, and Shaquille O’Neal bought Bored Apes. Adidas did too, and they also bought digital land and released their own NFT collection.”

Why It Matters: The coming of the age of NFTs has widened the cryptocurrency industry as a whole and added more people to the fray who earn from it.

Source: “2021: The Year in Ethereum” By Ethereum Foundation

In 2021, artists, musicians, writers, and others used Ethereum to earn a combined $3.5 billion, making it one of the largest global platforms for creators, according to the report. 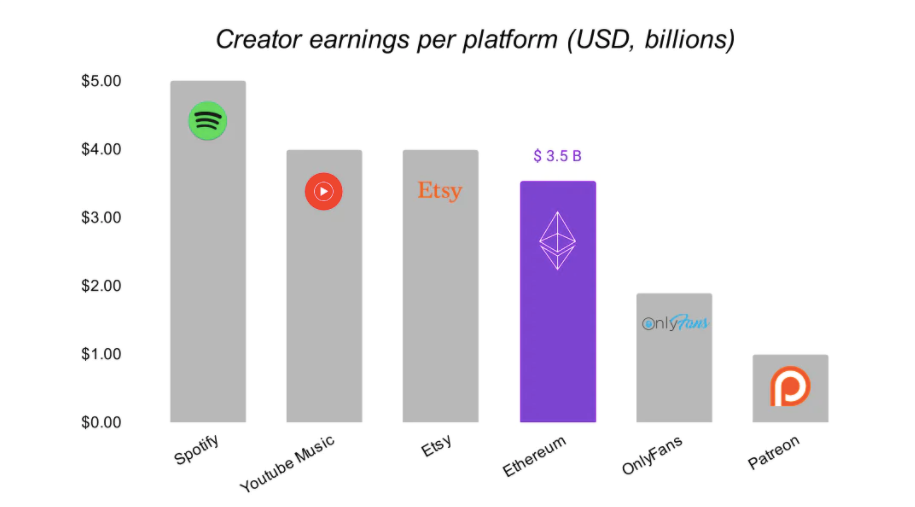 Creator Earnings By Platform: Source “2021: The Year in Ethereum”

The Foundation said that in terms of transfer of assets alone, Ethereum exceeded the transaction volume of Visa Inc’s (NYSE: V) network.

Ethereum was also the second-largest beneficiary in terms of network fees after Visa. While Visa raked in $24.1 billion in revenue in 2021, Ethereum’s L1 pulled in $9.19 trillion. Bitcoin (CRYPTO: BTC), however,  earned only $0.89 trillion from transaction fees.

In May 2021, the average transaction fee on Ethereum’s network soared to $70 levels, according to data from BitInfoCharts. However, it has since slid and dropped below $10. At press time, it was $8.05.

Even then, ETH remains more expensive than rival blockchains such as Cardano (ADA), Polkadot (DOT), and Solana (SOL).

Read Next: Here’s How Much $100 Invested In Cardano (ADA) Right Now Will Be Worth If It Regains All-Time High