Trading of bitcoin has been light as investors seem to be taking measure of an unsettled macroeconomic environment.

Prices: Bitcoin holds above $41,000, even after hawkish comments from the chair of the U.S. central bank.

Insights: Bitcoin started the week slowly in Asia, and some investors may be placing their bets on DeFi.

Technician’s take: Bitcoin’s pullbacks could be limited over the short term.

Bitcoin (BTC) stood roughly where it did 24 hours ago, a little over $41,000, after a brief dip below this threshold following hawkish monetary policy comments from U.S. central bank Chair Jerome Powell.

Ether (ETH), the second-largest crypto by market cap after bitcoin, was changing hands at about $2,900, up over 2%. Other major cryptos were mixed. Trading volume was light as investors take stock of fast-moving, global macroeconomic trends. Bitcoin peaked at over $42,000 last week, buoyed by China’s commitment to support its flailing real estate and technology sectors.

Major stock indexes retrenched after Powell said in a speech at the National Association for Business Economics annual conference in Washington D.C. that the Federal Reserve might raise interest in 50-basis-point increments to tame inflation, which has been plaguing the U.S. economy, and threatens to worsen amid fall-out from Russia’s intensifying attacks on Ukraine. On Monday, Russian forces bombed a mall in the capital city of Kyiv, continuing its target of civilian locations, and U.S. President Joe Biden warned that Russia might launch cyberattacks on major U.S. companies in retaliation for severe economic sanctions.

The price of Brent crude oil, a widely watched measure of the energy market, rose 7% to $112 per barrel. Russia is one of the world’s leading suppliers of oil.

“Think about it as a tug of war between buyers and sellers and a period of indecisiveness,” she said. “I think that indecisiveness is reflecting itself in the lighter volumes, the less decisive trendy moves. “Then it just becomes a question as to whether that consolidation phase reconciles to the upside or the downside.”

She added: “We do think it will be reconciled to the upside with our short-term bullish bias. We see it as a function of that, and we would expect with any kind of breakout, let’s say above $45,000, we would expect volumes to come back into the market.”

Bitcoin started the trading week in Asia slowly, spending most of the day hovering around the $41,000 point, according to data from CoinDesk Indices.

But that’s bitcoin’s problem. But Layer 1 protocols like Avalanche rose 32% last week, while liquidity protocol Aave hit 34% in weekly gains and Ethereum pushed through 15% on the week.

Data from Glassnode reflects this.

The number of active addresses on the network are at a monthly low while long-term HODLers are at a yearly high. Likely there’s a lot of bitcoin parked to get liquidity on better-performing assets.

Bitcoin margin lending (loans only for trading that are stuck on the exchange, and not general lending like BlockFi does) rates are effectively flat, with Bitfinex not charging a fee and Poloniex charging only 0.4%. 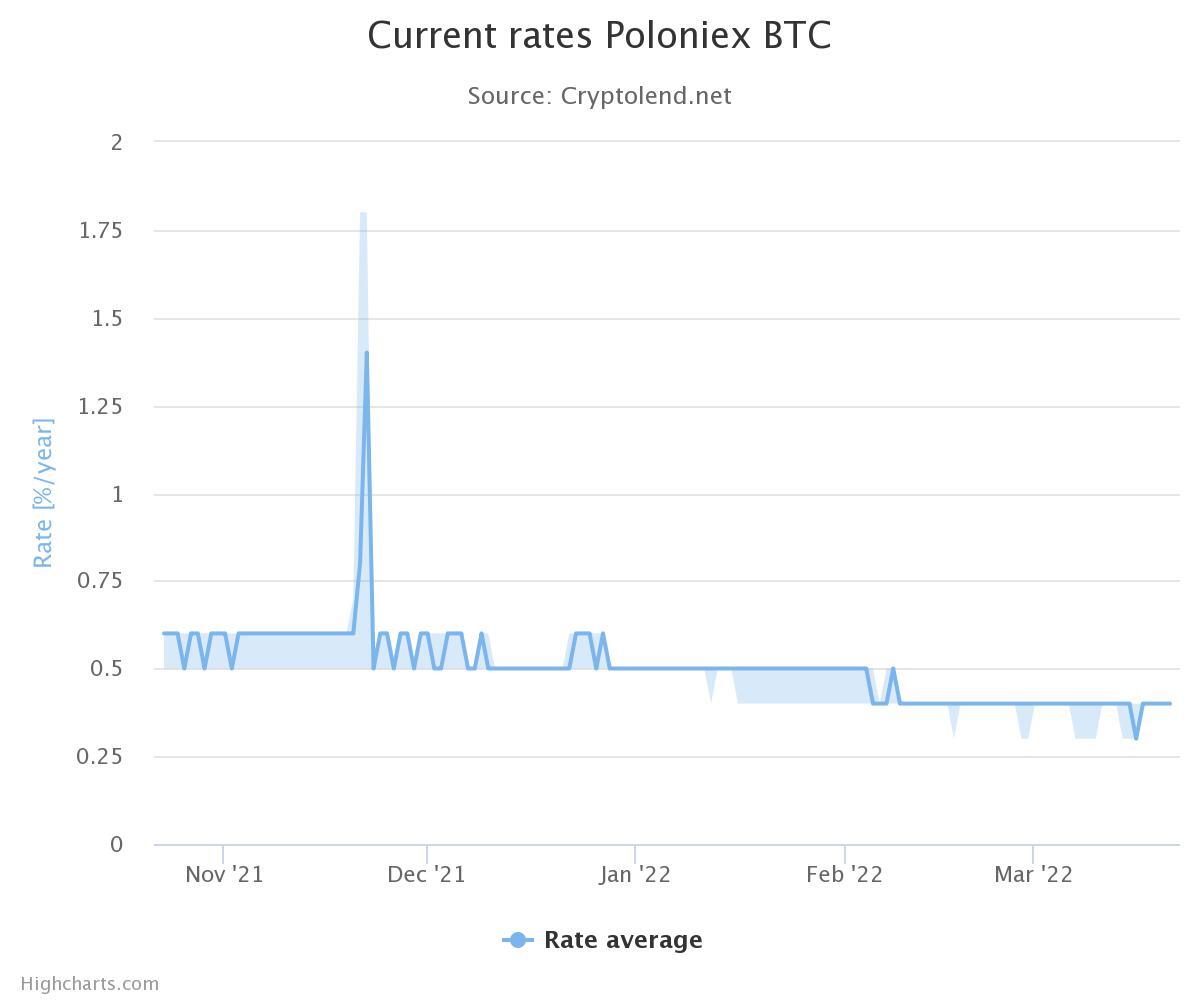 And where is all this bitcoin going? Likely into decentralized finance (DeFi). The Bored Ape Yacht Club-linked ApeCoin (APE) seemed to be the most exciting new thing on the blockchain, jumping over 10% during the day. As CoinDesk reported, APE covered calls were hitting a 42% projected annualized yield.

There are also staking possibilities. With the launch of Eth 2.0 soon to occur, traders are becoming increasingly bullish on ether with projected yields hitting 10% to 15%.

But remember, that all this isn’t necessarily a bad thing for bitcoin. Bitcoin’s volatility index was at a monthly low and approaching a yearly low as the market stabilized after the Fed raised rates as expected. All this helps the narrative of bitcoin as a store of value, not something that reacts violently to market gyrations as we saw last year. More bitcoin held with confidence for the long term is more liquidity available for DeFi.

.Bitcoin (BTC) is consolidating around the $41,000 price level amid declining trading volume.

The cryptocurrency is roughly flat over the past 24 hours, and pullbacks could be limited toward a strong support base at $37,000.

Further, the relative strength index (RSI) on the four-hour chart is declining from overbought levels, which reflects a loss of upside momentum. On the daily chart, the RSI is holding above the 50 neutral mark, which means buyers could remain active at lower support levels.

On the weekly chart, technical indicators are improving, similar to what occurred in August 2021, which preceded a 60% price rally. This time, however, there is negative momentum on the monthly chart, which typically precedes rangebound or negative price action. That means upside could be limited around the $46,000-$50,000 resistance zone.