Among history’s most-explosive investment vehicles, few even come close to what the Shiba Inu ( SHIB 0.50% ) cryptocurrency accomplished. In 2021, the digital token put up gains of roughly 46,000,000%, meaning those lucky enough to invest $1,000 at the beginning of the year and then sell at an opportune time became multimillionaires.

With such incredible gains, it’s not surprising that people wonder if the SHIB token is on track for more impressive wins. And the question of whether it could ever reach the $1 price point is one that pops up with some frequency in crypto circles. So, could the popular meme token really hit $1?

Tell it to me straight, dog

Let’s not beat around the bush too much here. Based on the cryptocurrency’s current coin count, there’s a fairly simple answer to the question of whether Shiba Inu could ever reach $1: No, this will almost certainly never happen.

In order to accomplish that, it would need to grow to 725 times the current market capitalization of Bitcoin, which currently has a market cap of roughly $813 billion. If that doesn’t seem implausible enough, consider that $589.7 trillion would be roughly 6.3 times the estimated global gross domestic product of roughly $94 trillion in 2021.

SHIB’s performance has already been nothing short of incredible, and it could still deliver more big wins, but even the most bullish investors should move forward with reasonable expectations about its growth potential.

What’s next for the SHIB token?

The overall cryptocurrency market has grown an incredible amount in less than 12 years, but the combined value of cryptocurrencies has also pulled back substantially from the lifetime high it hit in October 2021. 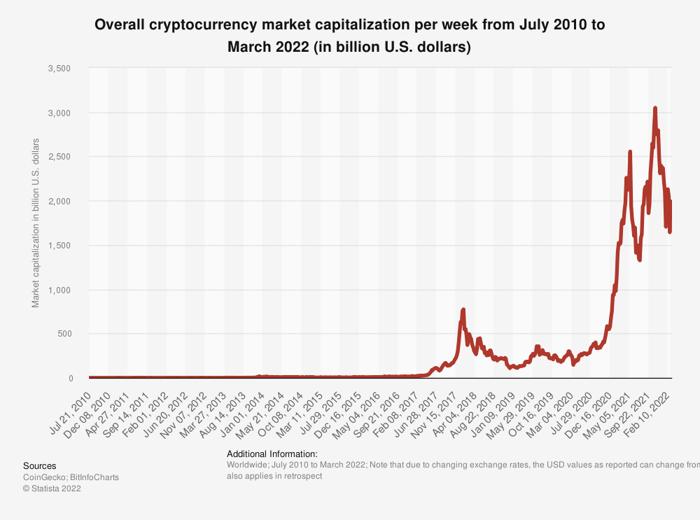 Shiba Inu hit an all-time high of $0.000086 on Oct. 28 last year, and its price has pulled back in conjunction with bearish momentum for the broader market. With its current token price sitting at roughly $0.000024, the cryptocurrency is currently down roughly 72% from its peak.

Shiba Inu also continues to face competition from the thousands of other cryptocurrencies currently on the market, and it could face pressure as more new digital tokens are created. Check out the chart below tracking the total number of cryptocurrencies that have been available from 2013 through February 2022: 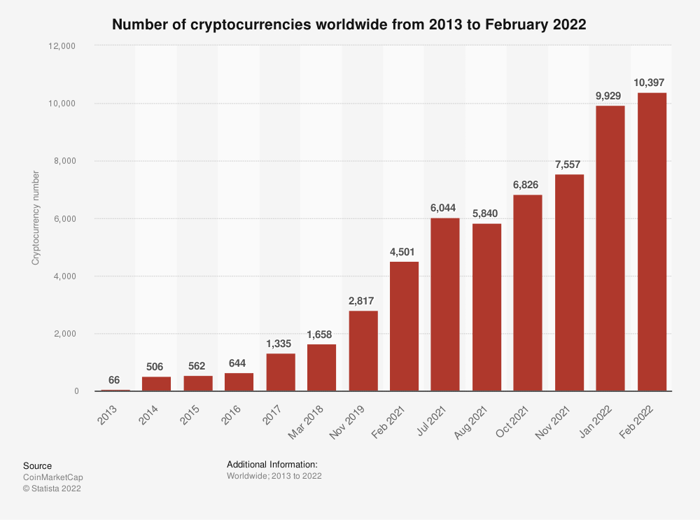 With a growing number of coins for investors to choose from, SHIB’s value could be pressured, but the digital token could register more big gains if the broader cryptocurrency market sees another strong bullish run, a resurgence in meme-powered momentum, or increased adoption by investors or businesses. If a dramatic amount of coins were burned, that would also result in the total supply being reduced and would likely result in significant gains for the cryptocurrency’s token price.

Even after a big pullback from its peak, the SHIB token is still up roughly 42,000% over the last year, and it has an enthusiastic, highly engaged base of supporters. If the token were to bounce back to its peak level, that would work out to gains of 258%. Hitting a market cap of $100 billion might sound pretty mundane compared to a market cap of almost $590 trillion, but it’s a lot more realistic and would still mean gains of more than 650% from current pricing levels.

This article represents the opinion of the writer, who may disagree with the “official” recommendation position of a Motley Fool premium advisory service. We’re motley! Questioning an investing thesis – even one of our own – helps us all think critically about investing and make decisions that help us become smarter, happier, and richer.