Cardano price has managed to make an explosive run higher over the last four days as Bitcoin bulls make a comeback. This impressive upswing looks now to be preparing for another leg up.

Cardano blockchain development through the roof

Supporting this bullish outlook are the recent developments from both a fundamental and an on-chain scenario. Perhaps the most significant one is the recent uptick in the development activity for the ADA blockchain.

Based on Santiment’s data, this metric hit an all-time high of 68 on May 27. Considering the upcoming Vasil hard fork, which is set to debut in June, this spike in development activity makes complete sense.

Investors try to catch up

Adding to this spike in backend activity for the Cardano blockchain is the recent uptick in the 24-hour transaction volume. This number is currently hovering around $14.24 billion under Bitcoin’s at $18.60 billion.

This massive on-chain volume transacted on the ADA chain indicates a high level of activity from investors or users. Investors need to note that Cardano has been undergoing massive changes not just due to the recent Vasil hard fork – since the implementation of the smart contracts and the ability to mint native assets, the activity of investors, developers and users has grown exponentially.

As a result, the massive transaction volume number that almost competes with the big crypto could be a combination of transactions on the blockchain, dApps and NFT marketplaces.

Further adding credence to such a high transaction volume for Cardano is the recent lift-off of the NFT marketplaces. Pool.pm, a data aggregation platform, shows that more than 5 million NFTs or native assets were minted on the Cardano blockchain.

This massive uptick in user interest in the ADA blockchain came after the Mary hard fork that launched on March 1, 2021. In July 2020, Cardano’s founder Charles Hoskin foreshadowed the launch of multi-asset functionality by tweeting,

This time next year I predict there will be hundreds of assets running on Cardano, thousands of DApps, tons of interesting projects and lots of unique use and utility. 2021 is going to be so much fun watching Cardano grow and evolve. The community is definitely ready to innovate

More recently, Hoskinson replied to a critique stating that his aforementioned tweet,

Aged great, and 4 million assets issued. How about you actually get informed before you shitpost and make yourself look like an idiot.

Adding credence to the fundamental outlook for Cardano is the launch of the Iagon Token Bridge. This bridge allows investors to swap their ERC-20 tokens for Cardano native tokens. Similar to the connections across different ecosystems, this bridge between the ETH and ADA ecosystem will allow users to seamlessly connect, transfer and swap their assets.

Moreover, the primary reason for bridges is to allow the transfer of liquidity or capital across blockchains. Since Ethereum is the reigning champion in terms of network effects and total value locked, competing blockchains try to siphon this liquidity.

Therefore, the recent uptick in development activity and the users interacting with the Cardano blockchain can be explained by the ability to seamlessly connect and transfer assets to and from the Ethereum blockchain.

With these major updates from a fundamental perspective, the technicals are bound to see a noticeable increase in the market value of the underlying token, as reflected in ADA rallying roughly 55% over the last five days.

As investors continue to book profits, ADA is going to retrace to stable support levels. In this regard, the $0.614 can serve as a foothold, but the barriers that will prevent a further sell-off are $0.516 and $0.541.

Investors can accumulate ADA at these discounted prices and wait patiently for the next leg, which could propel Cardano price by 52% to tag the lower limit of the $0.785 to $0.90 hurdle. 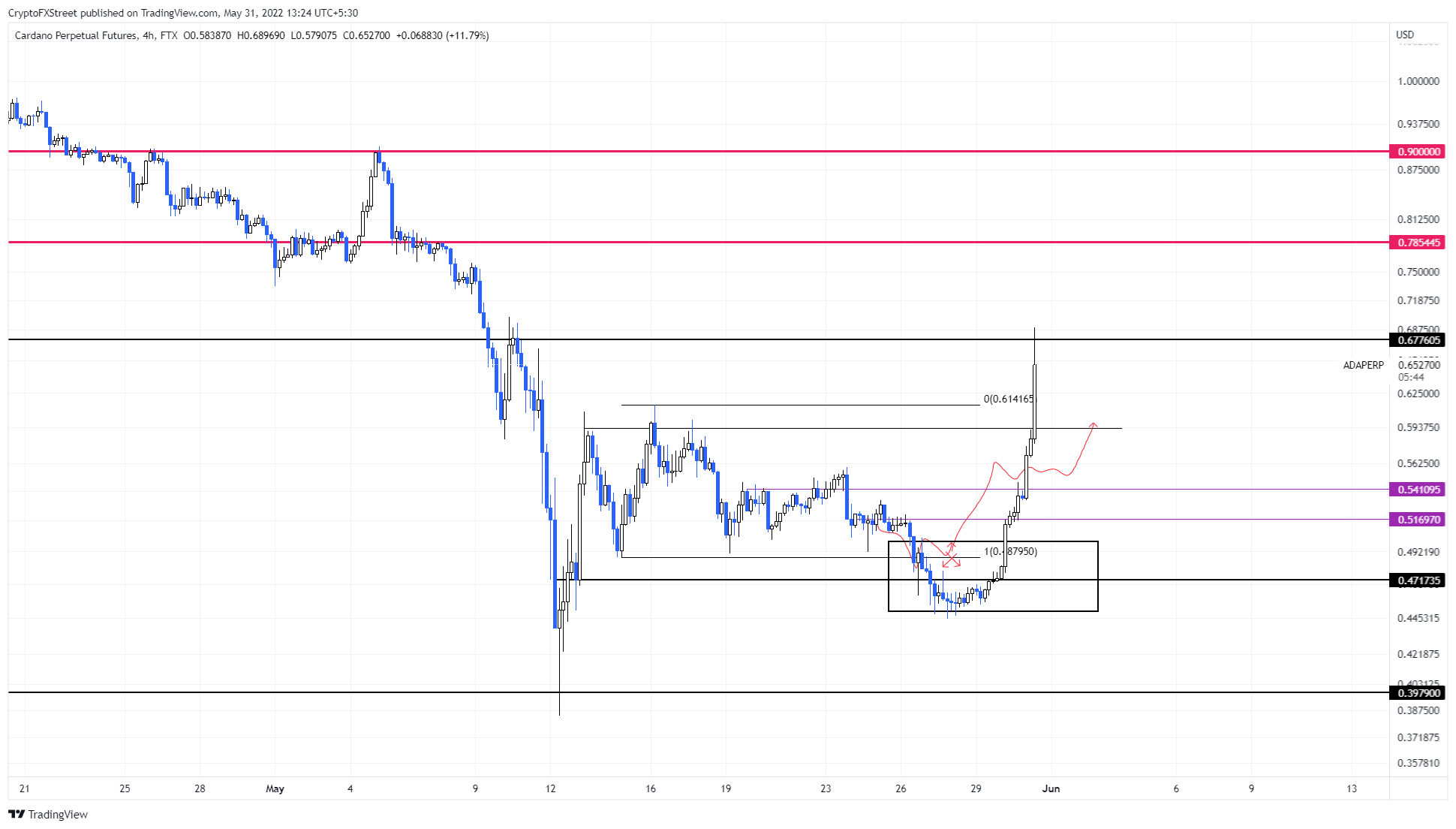 While things are favoring bulls when it comes to Cardano price, a sudden spike in selling pressure could knock ADA down to retest the range low at $0.487. If Cardano price produces a four-hour candlestick close below $0.471 will invalidate the bullish thesis by producing a lower low.

In this case, ADA could crash to $0.397, where buyers could make a comeback.