A much-awaited recovery rally has occurred for Bitcoin prices after a month of consolidation around $20k. Interestingly, this coincides with the previous cycle peak in 2017.

Bitcoin’s 66% decline from its ATH has largely evicted speculators, leaving only whales and those with strong convictions to hold.

However, a recent trend has seen short-term holders flock to the $20K region, where ownership is being transferred from capitulating sellers to more optimistic buyers.

At the same time, holders who have accumulated coins over the past six months refuse to liquidate their positions despite heavy unrealized losses, suggesting they are less sensitive to market fluctuations.

Analyzing the Mayer Multiple, a multiple of the current Bitcoin price over the 200-day moving average, it dropped below 0.55 at the extreme of this price correction, indicating the market traded at a 45% discount to the 200DMA. Cryptocurrency prices have historically formed cyclical bottoms under this level, but this has been rare, occurring less than 3% of the time. 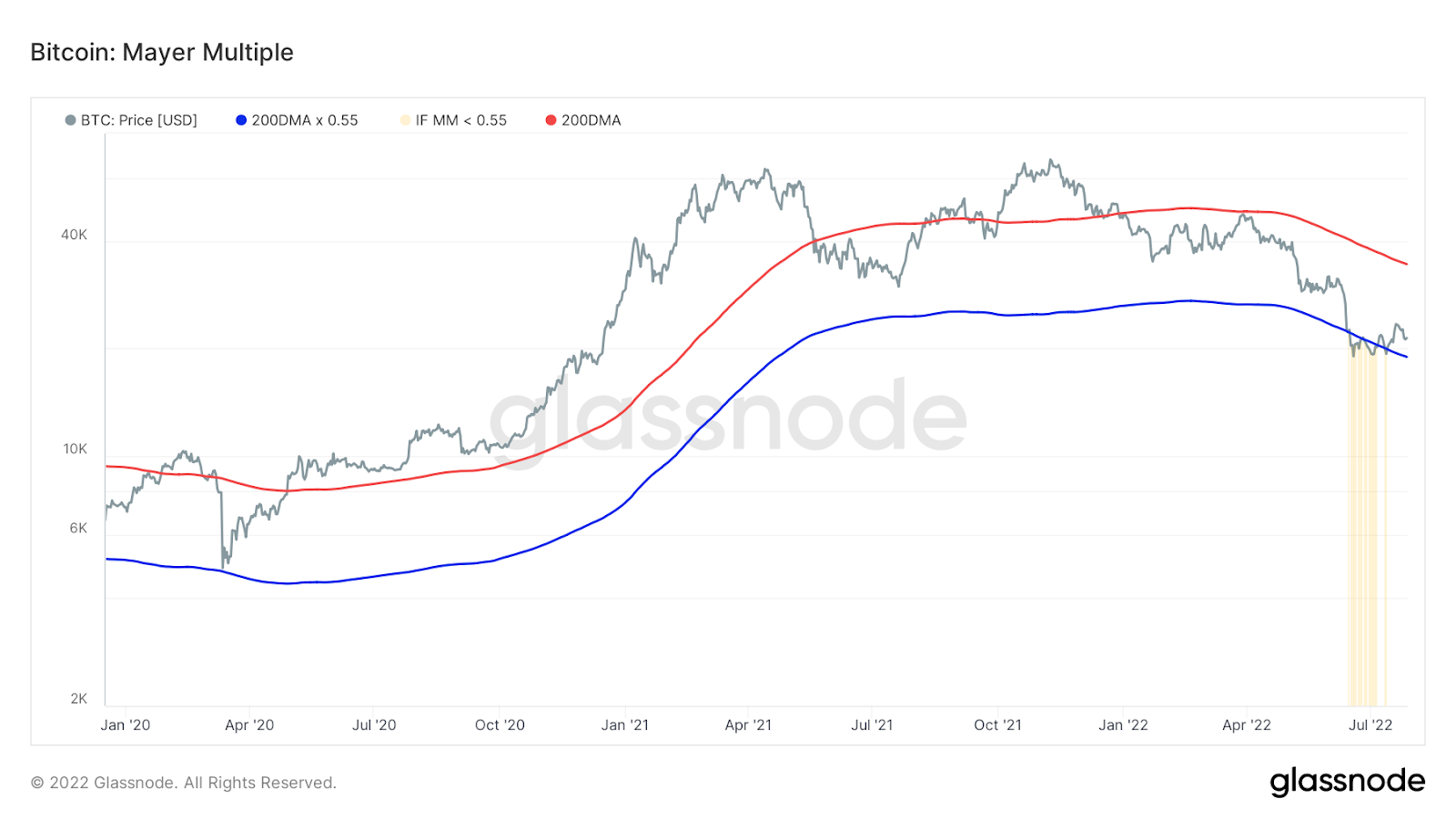 As of right now, Bitcoin appears to be eclipsing the level after having been below it for some time. That means the worst of the crypto bear market is likely over, if history is any guide.

The Realized Price climbs above the LTH Realized Price in times of market bottoms, sustained strength, and sufficient demand to offset profit-taking. Historically, bear market low divergences have lasted between 248 days and 575 days. A comparatively short period of 17 days has been in effect for the current cycle, a comparatively short time frame.

BTC price is determined by Macro – No doubts

Although we wanted BTC to be independent from traditional markets and macroeconomic indicators, it is not the case right now. With the entry of major institutional players and their vast amounts of liquidity, this dependence intensified. So the behavior of digital assets is influenced by global liquidity flows.

This is why M2 money supply, which includes physical cash, deposits, and “less liquid” money including bank savings accounts, can be a leading indicator of Bitcoin’s price movement. 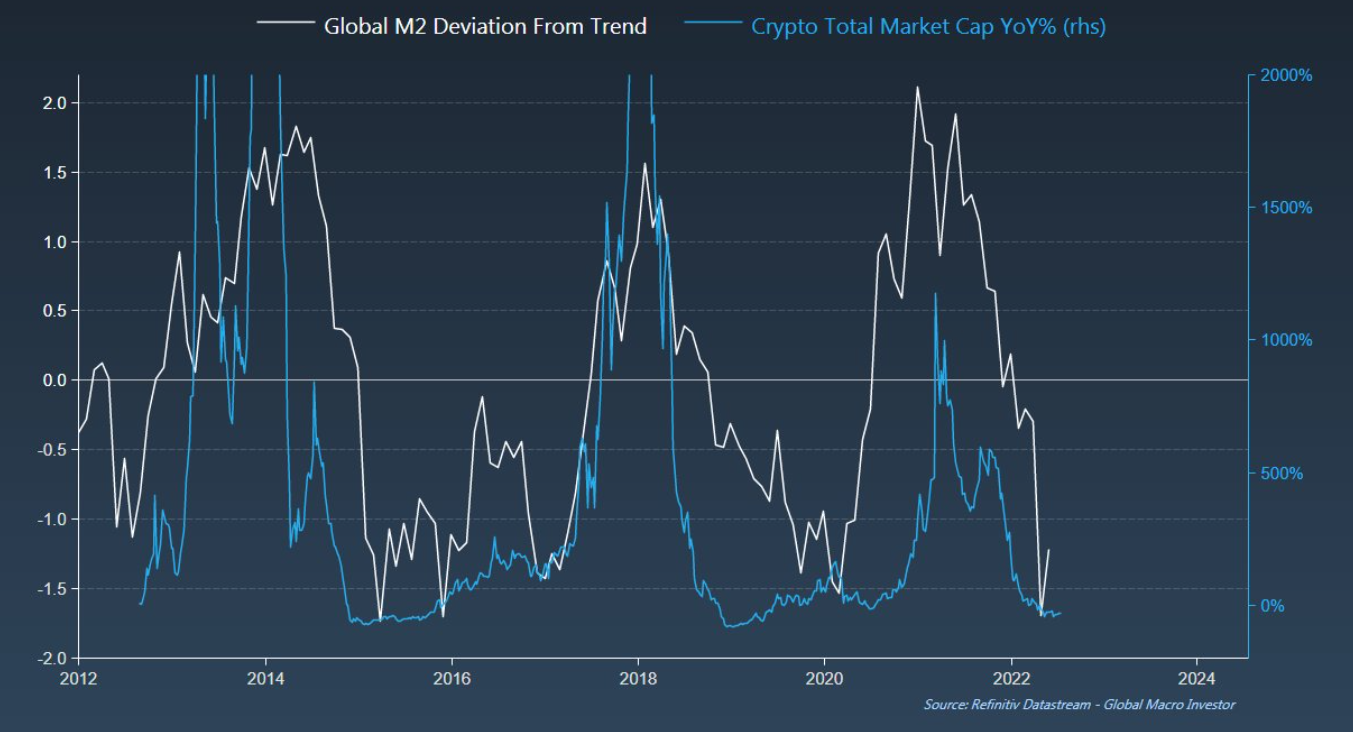 Moreover, as we can often see at ChangeNOW, the S&P 500 and Bitcoin prices are closely correlated. From a larger perspective, the S&P is driven by the consolidated balance sheets of major central banks. In general, a rising S&P 500 is associated with expanding central bank balance sheets, and the same is true for Bitcoin. 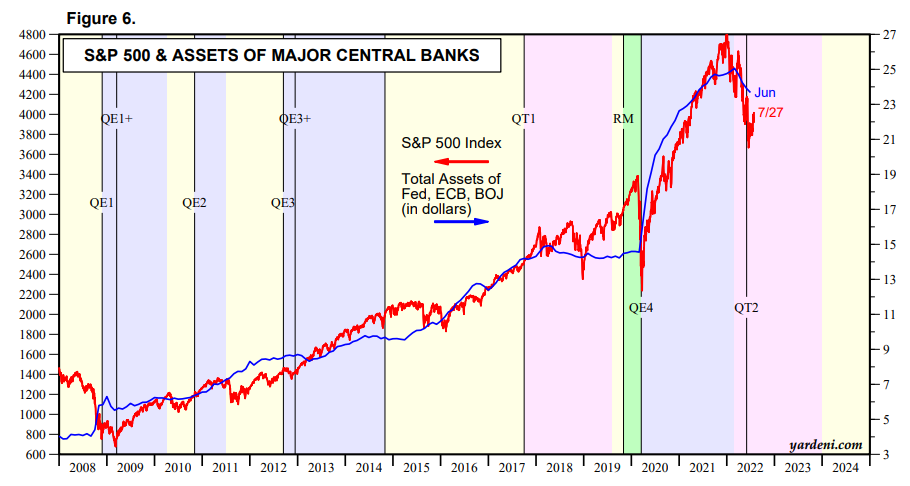 So, you can get a sense of Bitcoin’s future by monitoring the aggregated central banks balance sheets chart.

In analyzing Bitcoin on-chain activity, we at ChangeNOW can see that long-term holders, who are less affected by BTC price volatility, never left the market, while short-term speculators escaped during the recent sell-off, allowing more optimistic buyers to enter. Meanwhile, as we look at global liquidity flows originating from major central banks, we can get a sense of what is going on with Bitcoin’s price, as well as what is to come in the near future. It doesn’t matter whether you’re a strong long-term bull, a capitulating seller, a fresh buyer, or just watching from afar, we all need to understand the logical side of this seemingly chaotic crypto market.